I was on a business visit to Cairo recently where I was fortunate to witness the last of seven wonders of the ancient world.

The pyramids are so iconic, so astonishingly ancient, that it is hard to imagine that were built 4,600 years ago. Along with the enigmatic Sphinx and other smaller tombs and monuments, Giza has three principal pyramids: Khufu (originally 481 feet high, and sometimes called Cheops, or the Great Pyramid); Khafre (471 feet); and Menkaure (213 feet). Here are a few very interesting facts about them: 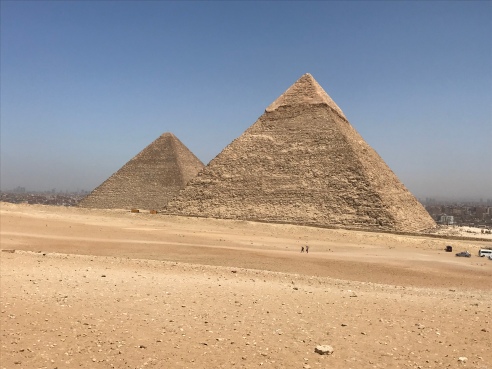 Why were they built?

The pyramid was built as a tomb for the Fourth Dynasty Egyptian pharaoh Khufu (often Hellenized as “Cheops”) and was constructed over a 20-year period. Khufu’s vizier, Hemiunu (also called Hemon) is believed by some to be the architect of the Great Pyramid.Apart from being burial tombs for pharaohs and their families, the pyramids were also built to spiritually escort the dead pharaohs into the afterlife. The ancient Egyptians were quite religious, and they believed the pyramids were safe entries into the other life after death. The Egyptians believed in many gods and believed that after death, the pharaohs transitioned to gods. They built the sphinx on the pyramids entry to protect the dead kings from spiritual attacks. These beliefs led to the construction of this highly treasured structures.

What is the Significance of the Sphinx?

The sphinx is the oldest royal statue in Egypt which was first built with the pyramid of Khafre. Most of the many Egyptologists who have written about the sphinx argue that the statue was built out of an outcrop of a limestone stone that remained after quarrying enough for the pyramid. The result was the birth of one of the oldest and the most iconic statues in the world. The image is a combination of a lion (symbol of power) on the body, and a human being on the head. From the north side the profile of the Sphinx reveals the proportion of the body to the head. It would appear as though the head is small in proportion to the body. Because of the changing desert terrain, the body of the Sphinx has been buried several times over the past several thousand years. Most recently in 1905, the sand has been cleared away to expose the magnitude and beauty of the entirety of the Sphinx. The paws themselves are 50 feet long (15m) while the entire length is 150 feet (45m). The head is 30 (10m) feet long and 14 feet (4m) wide. Because certain layers of the stone are softer than others, there is a high degree of erosion that has claimed the original detail of the carved figure.

Another startling fact about the pyramids of Egypt is the existence of the intricate web of numerous tunnels and mysterious chambers and shafts under the pyramids. The tunnels are as old as the soil itself and behold thousands of artifacts. Not many people know about this, as the tunnels excavations are supervised by the government and the information held with quite a high level of confidentiality. The details of the commodities found under these pyramids in the tunnels and the shafts have never been shared with the public.

Temperatures inside the Pyramids Is Constant at 20°C

Finally, the Pyramids once Glittered

The great pyramids were once glittering in the reflection of sunlight. They were highly polished with glimmering limestone white casing. These coverings have fallen off the buildings with time, and thus you can no longer see the shining surface. Some of the polish has gotten loose and fallen off due to earthquakes, while others have been cut off and taken away. When new, the pyramids reflected the sun rays you would think they were some giant jewels. The great pyramid of Giza is made 2.3 million blocks of limestone.

One thought on “In Awe of the Pyramids of Giza!”