“‎There once was an old man of Lyme, Who married three wives at a time, When asked, ‘Why a third?’, He replied, ‘One’s absurd! And bigamy, sir, is a crime”. – All those who knew Dr. Vepa P Sarathi would definitely recount this limerick.

25th January 2012, the world lost someone who was extraordinaire, had an aura of knowledge, an elephantine memory, sophistication and a wit and humor that no one can and would be able to match. He was a big fan of PG Wodehouse, Sherlock Holmes detective stories and the Reader’s Digest. He hated watching TV but was a big fan of The Sound of Music, My Fair Lady, and all Gregory Peck movies.

The world knew him as a senior advocate in the Bhopal Gas Tragedy case, Advocate General of Sikkim and the nonagenarian professor at NALSAR, but I and my sisters knew him as the grandfather who sacrificed a lot for the 3 girls he fostered in Delhi, fighting against the world, against religion, caste and bringing up three girls like his own children.

Today on his 5th death anniversary, would like to dedicate my blog to him and recount the memories we have with him as a grandfather and the other side of him.

17th July 1916, the day he was born is the date that we always celebrated, no matter what. He loved cutting the cake, the birthday parties and the gatherings we had every year. One great experience and a day he enjoyed thoroughly was his 90th birthday. My sisters and I threw a surprise birthday party for him at home and invited all those who mattered… though he kept saying that you should not have done so much… we could see that he had thoroughly enjoyed that evening and kept talking about that day for months together.

He was a foodie and but not just that, he also had an affinity towards weird food combinations which he absolutely loved and cared two hoots about what the world said. One such combination, unique to him and him alone was this….. he would take a bowl, place 4 idlis, soak it in curd and pour a dollop of roohafzaa, especially during the summer, which would not fail to bring a smile on his face. He loved the small samosas sold at the NALSAR canteen, ice cream at any time and surprisingly he loved the sub sandwiches. The flip side to all this was he would advise everyone, including us, to have chyavanprash, threptin biscuits, and complan daily to keep healthy!

He was a strong atheist, but read the Bhagavad Gita daily and followed it to the Tee. He completely disbelieved in caste, religion and more importantly, girl child is never a burden. He was a man of modern thoughts, taught us to stand on our feet before settling down with anyone, he didn’t believe that marrying and settling down was the way life needs to be.  He was willing to spend time with my friends, share a few drinks and jokes while he was at it. 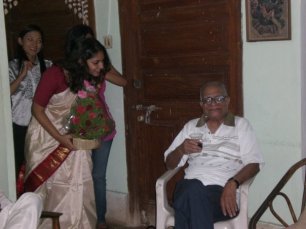 Bada Uncle as we called him, was a humble, honest and gracious gentlemen. The reason I called him humble is that, he fostered my sisters and me like his own children and sacrificed his life for us. Today we lead a life of luxury with good jobs, having had the best education and support to be where we are on this Day and time. While I praise him for having taken this step, hats off to his family who supported this decision. His wife, Shanta who lived her life taking care of us. His Son in law, Y A Rao, who had to choose between us and his family, he chose us and last but not the least his daughter Haidee, who unfortunately left Earth very early in her life, leaving us with her parents. They were a backbone to him to bring us up. They cut all those people who had something against us because we were not his blood or caste, completely from their lives. It takes a lot of guts to do what they did and will always be cherished for this reason.

In the end, all I can say is that my sisters and I were born with a silver spoon to have been adopted by this family who is responsible for who we are today!